I'm running Android 4.2.1 and recently the Play Store app updated to version 4.8.20 and since then I'm facing icon issues within the store. 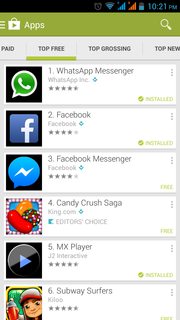 As you can see, there's a weird black background for every app icon, this is the case for every page within play store, all the icons have this kind of background. I once tried un-installing Play Store updates and fell back to pre-installed version 4.1 of Play Store, which solved the icon issues (but left me with older version of Play Store). And obviously, the Play Store again updated itself to latest version and I again have same issue.

Note that there isn't any such problem on my different Android phone (which is running Android 4.2.2 but has same Play Store version, 4.8.20).

I've tried clearing Play Store cache, App Data, and as said earlier, uninstalling updates (which momentarily solves the problem), but nothing seems to solve the problem with this version of Play Store, only option I haven't tried is hard resetting my phone, which I want to avoid.

Is this a known bug with this version of Play Store? what are the options I have to fix this?

Try uninstall updates from google playstore at your phone settings.Clear data and open it.Uncheck box"keep me up to date"...I know this is an older version but u can wait for the next update..

[SOLVED] Play Store crashes when menu or back button are tapped

[SOLVED] No "delta updates" in Google Play Store on Android 4.1+