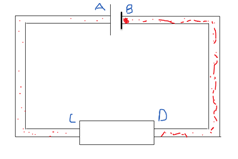 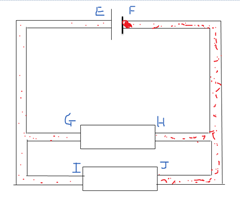 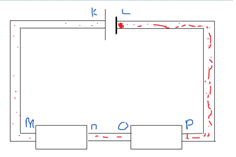 I am trying to understand potential difference and electromotive force in terms of electrons.

I have several parts to by question:

The charge is the same on either side of the two points, but the energy that the charges have is different.

The distinction between emf and potential difference is often glossed over and often misunderstood so this is an appropriate and interesting question.

Essentially, it is the emf that moves charge around a closed path - a circuit - while potential difference is due to the charge distribution along the circuit.

Consider the first circuit; there is a battery (or cell actually), the source of emf. If there is no circuit connected to the battery, the potential difference between the battery terminals is equal in magnitude to the emf.

From the Wikipedia article "Electromotive force":

In the case of an open circuit, the electric charge that has been separated by the mechanism generating the emf creates an electric field opposing the separation mechanism. For example, the chemical reaction in a voltaic cell stops when the opposing electric field at each electrode is strong enough to arrest the reactions.

The electric charge that has been separated creates an electric potential difference that can be measured with a voltmeter between the terminals of the device. The magnitude of the emf for the battery (or other source) is the value of this 'open circuit' voltage.

If an external circuit (path for charge to flow) is connected to the emf source, electrons from the more negative terminal will flow through the circuit to the more positive terminal.

There is no better demonstration of the distinction between emf and potential difference than to place a short circuit across the terminals of the battery (this must be done carefully and quickly) to determine the short-circuit current.

Assuming an effectively ideal short circuit, the potential difference between the battery terminals will be effectively 0V yet there will be a large current through the short-circuit.

It is the emf that 'drives' this current round the closed path.

Now, once again consider the first circuit. Clearly, the emf is driving the electrons clockwise but it is also clear that, for there to be a current through the resistor, there must be a potential difference (Ohm's law). Thus, the electron density is slightly greater on the conductor connected to the more negative terminal of the resistor than on the conductor connected to the more positive terminal.

There's much more to emf than what I've outlined here and the Wikipedia article (and links and reference therein) I linked above gives much more detail.

You should not think of electrons throughout the circuit as one part having more electrons than the other. You should instead think of the electrons within the conductors in terms of their energy. For example when you connect have a simple circuit with a battery, a set of wires, and a load. When you close the circuit, the electrons at the negative side of the battery will feel attraction to the positive side as this side has a deficiency of electrons. The electrons however do not just speed through the circuit and get through to the other side. They act as sort of a clothesline. Since electrons repel one another when the first electrons move the electrons in front of them, those electrons get repelled and this starts a chain reaction throughout the whole circuit. Now whenever the electrons come across a resistor, for example they lose some of their energy and are not as active to get to the other side of the battery and this is measured as a voltage or potential drop.

I understand what you have said but surly by the defintion of a potential difference across a resistor it means that the charge distriubtion is different either side?

[SOLVED] In a circuit with two identical resistors, how does the battery 'know' to only deposit half of the emf at one and half at the other (KVL)?

Voltage drop in Drude's model and the electromotive force

[SOLVED] Potential Difference in a wire with no current

[SOLVED] What is the difference between electric potential, potential difference (PD), voltage and electromotive force (EMF)?

[SOLVED] If a charge needs potential difference to move