At xmas, I had a cup of tea with some debris at the bottom from the leaves. With less than an inch of tea left, I'd shake the cup to get a little vortex going, then stop shaking and watch it spin. At first, the particles were dispersed fairly evenly throughout the liquid, but as time went on (and the vortex slowed, although I don't know if it's relevant) the particles would collect in the middle, until, by the time the liquid appeared to almost no longer be turning, all the little bits were collected in this nice neat pile in the center.

What's the physical explanation of the accumulation of particles in the middle?

My guess is that it's something to do with a larger radius costing the particles more work through friction...

My simple non-mathematical theory to explain this counter-intuitive behaviour is based on hydrostatic pressure.

If this theory is true we should expect that particles floating at the surface would not display this behaviour, because there would be no such hydrostatic pressure gradient as the liquid surface is uniformly at atmospheric pressure.

Also, preventing the rotating liquid surface to adopt a vortex shape (e.g. by enclosing the liquid surface by a transparent sheet?) should suppress this behaviour.

As yet I have not tested my theory in these ways!

Had to do this for a university assignment, Gerben's answer and this answer explain it pretty well but I found a fantastic video that goes through an experiment and takes you to step by step through the process, thought I should share. (If you want a proper explanation and don't want to watch the video, MIT has some film notes here).

The non-intuitive result is basically due to secondary flows, as the primary rotational flow with Velocity=R(radius)*C(some constant) suggests that the tea leaves should be forced outward by centrifugal force. However, as can be seen from the experiment, this is not the case and a secondary flow needs to be introduced to explain the effect.

Seen below is the velocity profile of such a system, uniform until the flow nears the bottom of the vessel, where the velocity is bounded by the no-slip condition.

In order to satisfy the conservation of momentum equation given by Euler, the decrease in velocity forces the radius of the flowpath to shrink, accommodating a constant pressure gradient throughout the system. 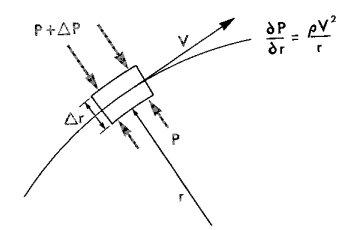 FYI This effect is also why boats always sail closer to the outer bank rather than the inner bank, would've thought it would be the other way round 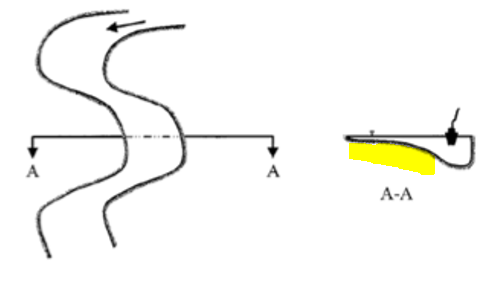 I think the leaves congregate in the center as the tea decelerates due to the flow pattern established by the initial rotation. In effect the flow pattern in the tea will be a toroid flowing up the centre and down the outside effectively driving the denser particles (tea) at the bottom on the fluid into a pile in the middle.

This seems to be the most correct answer. gigacyan mentioned in the comments on the question that there is a wikipedia page en.wikipedia.org/wiki/Tea_leaf_paradox but never posted an answer!

If you check Bernoulli's equation across streamlines (not along), you will see that particles with larger radius have higher static pressure than those with small radius, which actually drives the motion towards the center:

Welcome to Physics Stack Exchange! I took the liberty of typesetting your answer for you to make it more readable, but it may be helpful to learn some MathJax so you can do it yourself in the future.

The solids in the suspension are denser than the liquid solution and so more momentum is needed to increase the centripetal force and throw the solid out further. The solution however, tea, is much less dense than the solid so it is thrown out further.

Your guess is pretty much right, because the radius would be greater if the same force was applied to a less dense.

Isn't this the opposite of what a centrifuge actually does, i.e. pushing dense particles outwards?

Its the Centripetal force that causes the particles to come at the centre due to circular motion.

Comment to the answer(v1): Schematically, the tealeaves travel radially to the center via a non-rotating Ekman layer near the bottom, so there is no circular motion involved.

The word viscosity hasn't been used above, and yet it's crucial to understand the problem. Since tea is viscous, it obeys a type of 'non-slip condition': it's completely at rest against the sides and bottom of the cup. The tea forms a small 'boundary layer' (of ~ 0.04 cm)on the bottom, where there is a large velocity gradient, since outside of this layer the tea behaves as if it were inviscid. This boundary layer is called an Ekman layer - this should allow you to look up good references on the subject. Georg's model explained above is quite correct. I just wanted to add that this is a classical but very subtle exercise (you need to use Navier-Stokes in cylindrical coordinates in a rotating frame in two different regimes...), but in the end you can actually show that inside the boundary layer $$v_r = -\frac{\Delta \Omega}{2} r e^{-\hat{z}}\sin{\hat{z}},$$ where $\Delta \Omega$ is the difference in rotational velocity between the bottom and the top of the cup, $\hat{z} = z \sqrt{\frac{\Omega}{\nu}}$ (thus giving a typical size for the boundary layer...), $\Omega$ is the typical rotational velocity and $\nu$ the tea's viscosity.

The water molecules move more quickly along the periphery than in the center of the cup. The resulting force on a macroscopic object is directed inward, as I try to show in diagram. Oops, as I have no points to render images I will substitute for text art:

The vertical lines are a representation of the velocity field

Any macroscopic object that extends, for instance, between radius 2 and 3 will suffer a force directed to the center. Tea leaves will move to the center.

UPDATE: This answer is still incomplete/incorrect even after the clarifications. (Velez)

The resulting force on a macroscopic object is directed inward Why does the velocity field imply that?

@Bruce: Momentum is proportional to mv² , each water atom has identical mass. Then the transfer of energy to the leaf is greater at a greater radius than in the inner part of the leaf, nearer to the configuration center. (I've considered a forced vortex where v=wr) see en.wikipedia.org/wiki/Vortex#Forced_.28rotational.29_vortex

Momentum is proportional to $v^2$? And why is it that greater kinetic energy near the border implies a force directed inward?

@Bruce: (continuation) The sheet behaves like a solid bar and is hitted along its lengh by molecules with different momentum.

@Helder: I see your point now. But that is not the case. If your logic was correct, then the leaves and particles would accumulate in the middle while the water spins at full speed. What happens is that they only accumulate after the water starts to decelerate. So your argument doesn't cause the leaves to move inward, it only causes them to spin.

@all:The answer I provided is incomplete even after the above clarifications. Any correct answer must involve the center of gravity of the leaf, IMO.

I will have to drink a tea;)

The leaf is a hydrodynamic surface that spins - like a wing, a frisbee (inverted), a boomerang (assimetry), en.wikipedia.org/wiki/Physics_of_flying_discs (and also microvortex) Those devices do not travel in straight line. The direction turn in the same sense (or on contrary?) of the spinning direction, at least in the final stage of flight?

FYI, water along the peripherals is actually slowed down due to the no-slip condition. It should have the same velocity as the walls of the cup at the edges.

Could a small vortex form off of a large vortex?

[SOLVED] What is the difference between a vortex ring and a circular line vortex?