I need to run multiple async tasks in a console application, and wait for them all to complete before further processing.

There's many articles out there, but I seem to get more confused the more I read. I've read and understand the basic principles of the Task library, but I'm clearly missing a link somewhere.

I understand that it's possible to chain tasks so that they start after another completes (which is pretty much the scenario for all the articles I've read), but I want all my Tasks running at the same time, and I want to know once they're all completed.

What's the simplest implementation for a scenario like this?

You can use WhenAll which will return an awaitable Task or WaitAll which has no return type and will block further code execution simular to Thread.Sleep until all tasks are completed, canceled or faulted. 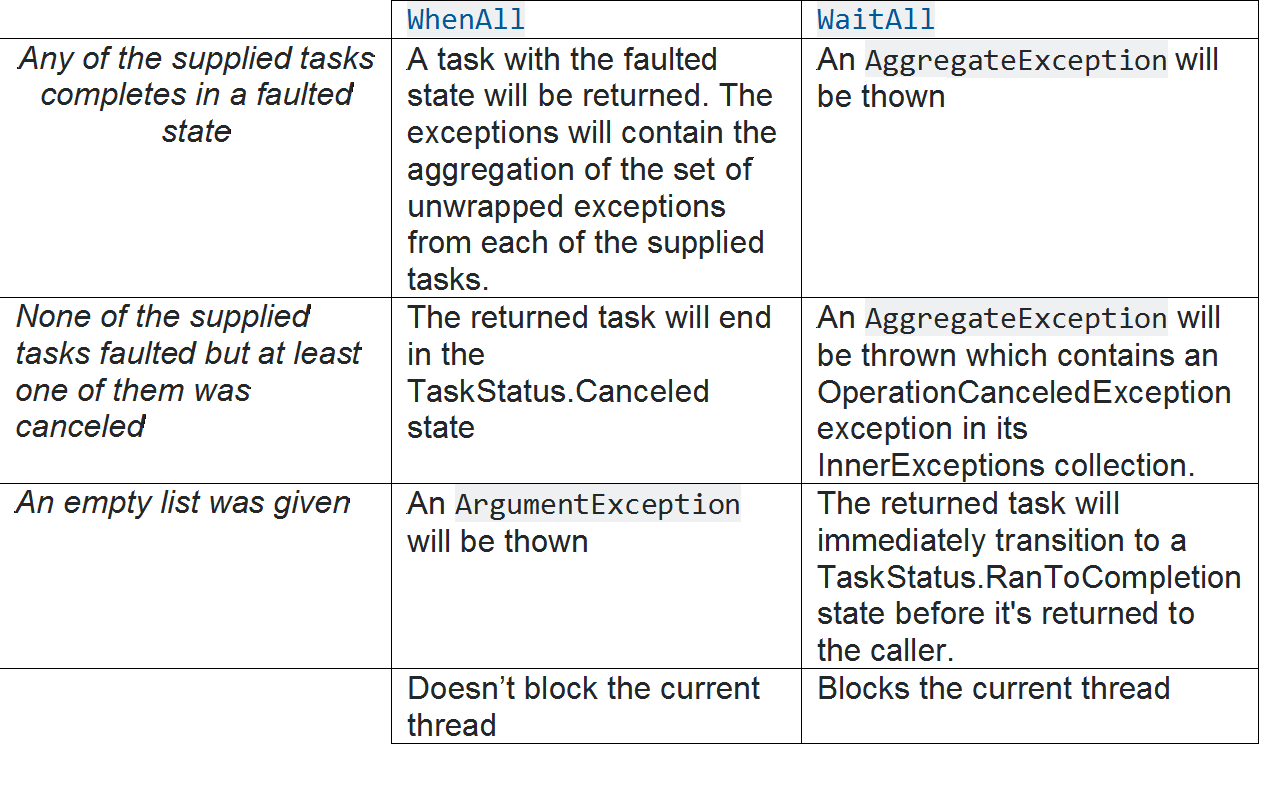 If you want to run the tasks in a praticular order you can get inspiration form this anwser.

sorry for coming to the party late but, why do you have await for each operation and at the same time use WaitAll or WhenAll. Shouldn't tasks in Task[] initialization be without await?

@dee zg You are right. The await above defeats the purpose. I ll change my answer and remove them.

yes, that's it. thanks for clarification! (upvote for nice answer)

I prepared a piece of code to show you how to use the task for some of these scenarios.

how get the results of Tasks? For example, for merge "rows" (from N tasks in parallel) in a datatable and bind it to gridview asp.net ?

Yet another answer...but I usually find myself in a case, when I need to load data simultaneously and put it into variables, like:

If LoadCatsAsync() and LoadDogAsync() are just database calls they are IO-bound. Task.Run() is for CPU-bound work; it adds additional unnecessary overhead if all you are doing is waiting for a response from the database server. Yuval's accepted answer is the right way for IO-bound work.

@StephenKennedy could you please clarify what kind of overhead and how much it can impact performance? Thanks!

That would be quite hard to summarise in the comments box :) Instead I recommend reading Stephen Cleary's articles - he's an expert on this stuff. Start here: blog.stephencleary.com/2013/10/…

The main difference between Task.WaitAll and Task.WhenAll is that the former will block (similar to using Wait on a single task) while the latter will not and can be awaited, yielding control back to the caller until all tasks finish.

If none of the supplied tasks faulted but at least one of them was canceled, the returned task will end in the Canceled state.

When I try this my tasks run sequentially? Does one have to start each task individually before await Task.WhenAll(task1, task2); ?

@Zapnologica Task.WhenAll doesn't start the tasks for you. You have to provide them "hot", meaning already started.

Ok. That makes sense. So what will your example do? Because you have not started them?

@Zapnologica In my example, both methods are the one to kick off the tasks. Task.WhenAll asynchronously waits for both of them to complete, but their execution happens concurrently.

is it the same to call Await Tasks.Task.Run(()=>dowork) for each function sequentially?

@batmaci No, await on each Task will await each task one at a time. using Task.WhenAll will concurrently wait for the completion of all tasks.

@YuvalItzchakov thank you very much! It is so simple but it helped me a lot today! Is worth at least +1000 :)

if you are not going to use await Task.WhenAll(...) then you can just StartNew on all the tasks and let it be

@Pierre I'm not following. What does StartNew and spinning new tasks have to do with asynchronously waiting on them all?

If there is an exception thrown inside of DoWorkAsync() or DoMoreWorkAsync() before the await calls are reached, won't the exception be lost? docs.microsoft.com/en-us/dotnet/visual-basic/language-refere‌​nce/…

@Ryan AFAIR Exceptions that happen before the first await point are thrown synchronously.

Another good example of using Task.WhenAll is here and it shows getting result from each afterwards.

This is how I do it with an array Func<>:

Why don't you just keep it as Task Array?

If your not careful @talha-talip-açıkgöz your execute the Tasks when you didn't expect them to execute. Doing it as a Func delegate makes your intent clear.

Is it possible to start multiple new threads, at the same time, using the await keyword rather than .Start() ?

@MattW No, when you use await, it would wait for it to complete. In this case you would not be able to create a multi-threaded environment. This is the reason that all the tasks are waited at the end of the loop.

Downvote for future readers since it isn't made clear that this is a blocking call.

See the accepted answer for reasons why not to do this.

The best option I've seen is the following extension method:

Or with an async lambda:

Do you want to chain the Tasks, or can they be invoked in a parallel manner?

and don't forget to check the previous Task instance in each ContinueWith as it might be faulted.

For the parallel manner
The most simple method I came across: Parallel.Invoke Otherwise there's Task.WaitAll or you can even use WaitHandles for doing a countdown to zero actions left (wait, there's a new class: CountdownEvent), or ...

Appreciate the answer, but your suggestions could have been explained a little more.

@drminnaar which other explanation beside the links to msdn with examples do you need? you didn't even click on the links, did you?

I clicked on the links, and I read the content. I was going for the Invoke, but there were a lot of If's and But's about whether it runs asynchronously or not. You were editing your answer continuously. The WaitAll link you posted was perfect, but I went for the answer that demonstrated the same functionality in a quicker and easier to read way. Don't take offense, your answer still provides good alternatives to other approaches.

@drminnaar no offense taken here, i am just curious :)

[SOLVED] Asynchronously wait for Task<T> to complete with timeout

[SOLVED] Why not inherit from List<T>?

[SOLVED] How would I run an async Task<T> method synchronously?

[SOLVED] Synchronously waiting for an async operation, and why does Wait() freeze the program here

[SOLVED] await Task.WhenAll does not wait for all tasks to complete