I tried to run my Hello World application in Android Studio. I got the following error:

Can you tell me what I can do with the error?

I already had HAXM installed, but it was an older version. Then I updated from SDK manager, then emulator worked!

As per this response, the complete steps are: 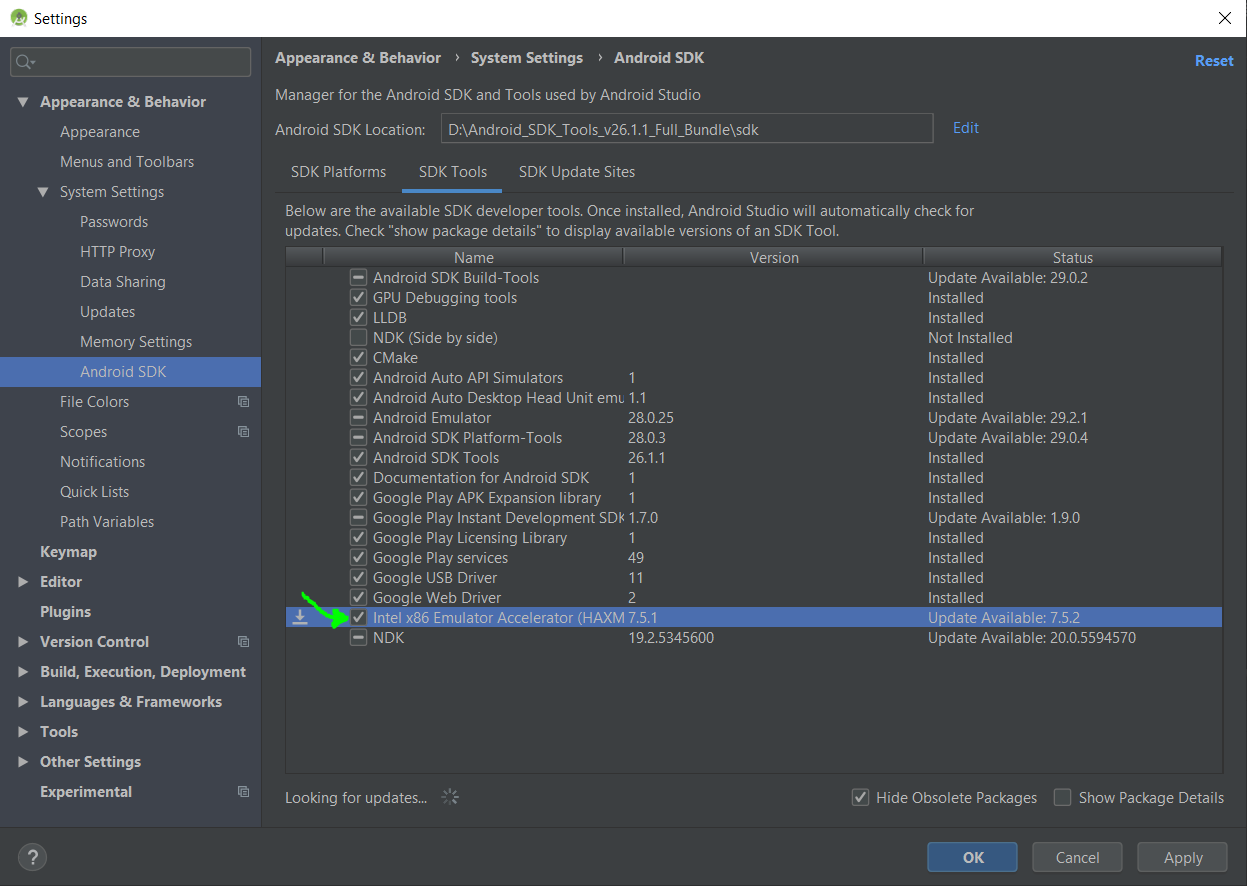 2) Now go to your SDK directory C:\users\%USERNAME%\AppData\Local\Android\sdk\extras\intel\Hardware_Accelerated_Execution_Manager\ and run the file named intelhaxm-android.exe.

In case you get an error like "Intel virtualization technology (vt,vt-x) is not enabled". Go to your BIOS settings and enable Hardware Virtualization.

3) Restart Android Studio and then try to start the AVD again.

It might take a minute or 2 to show the emulator window. If you don't find Android under Local folder, then download intelhaxm-andriod.exe directly from software.intel.com/en-us/android/articles/…

Is there a good reason why the bottom right button on SDK manager says "Install packages" and yet it does not install HAXM - just download ? I'd like to learn what reason could be behind.

@Peter - I believe the reasoning is that the SDK manager is designed to run as a regular user but installing HAXM requires admin access. It should, however, have a popup message when it has downloaded HAXM telling you what you need to do to get it working.

@PeriataBreatta Thank you - good and quite obvious guess :) If you are rignt, may it become an improvement point for google team..

Is this possible using command line? I am having this issue in a remote jenkins.

On executing the exe, first I did remove/ unistall, and then rerun to install it. Worked now!

NOTE: if you have Windows Hyper-V turned on this will cause you to not be able to run haxm. If you are having an issue with Hyper-V, make sure it is turned off in your settings: search in the Windows bar for “hyper”; the search result should take you to “Turn Windows features on or off”. Then make sure all the Hyper-V boxes are unchecked. 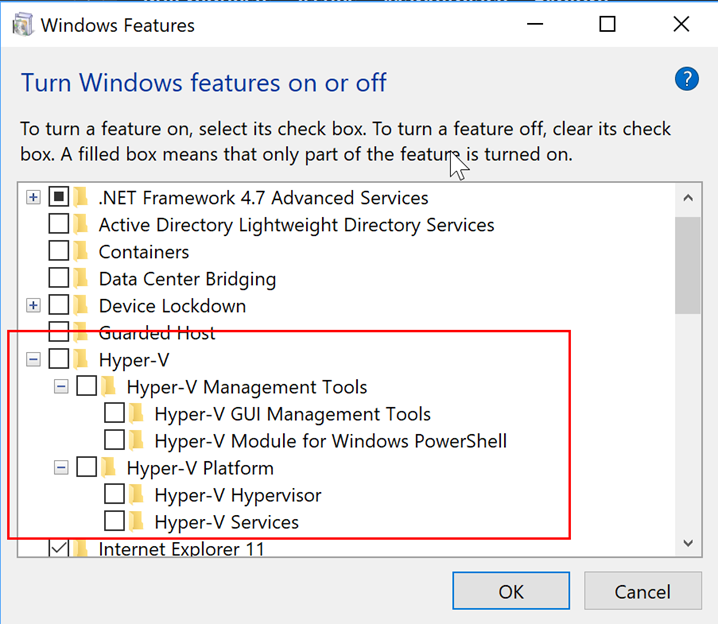 For me the following solution worked:

For those who still have problems with this, you can try using an alternative Android emulator such as Genymotion.

I'm using Ryzen 5 processor with latest Windows 10 update installed (1809), but still can't install HAXM. So, what I did to resolve this was:

You're good to go from here. 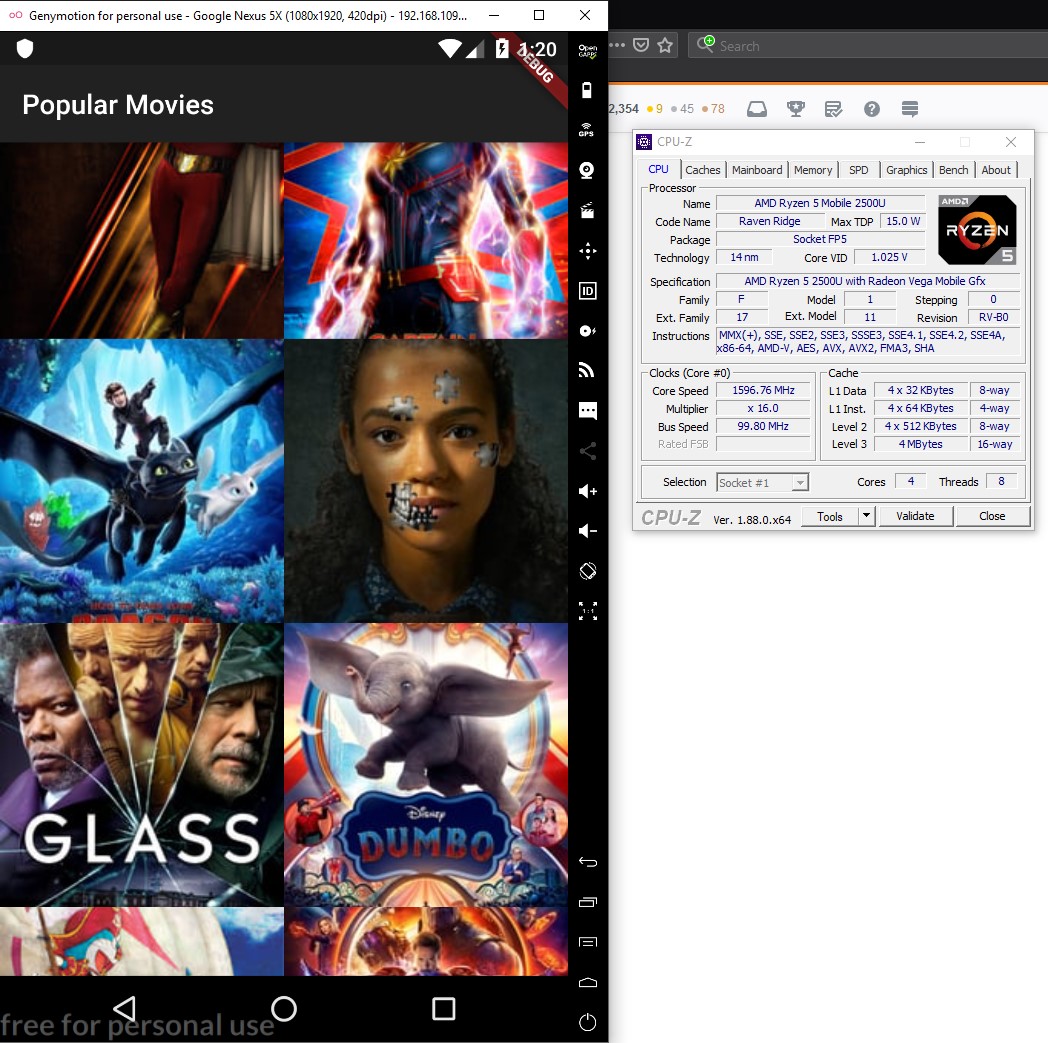 This is worked in my case

I had the same issue even when hardware acceleration installed. My solutions was uninstalling and reinstalling it using SDK Manager. Make sure you restart the Android studio after then.

This is a bit late but just figured that some answers are to go to the bios settings but for me, I was able to resolve this by just disabling the hyper-v feature. We do this by following these steps:

I experienced the same issue, but after turning off Hyper-V and enabling VT-x on my BIOS I still couldn't install the intelhaxm-android.exe program. 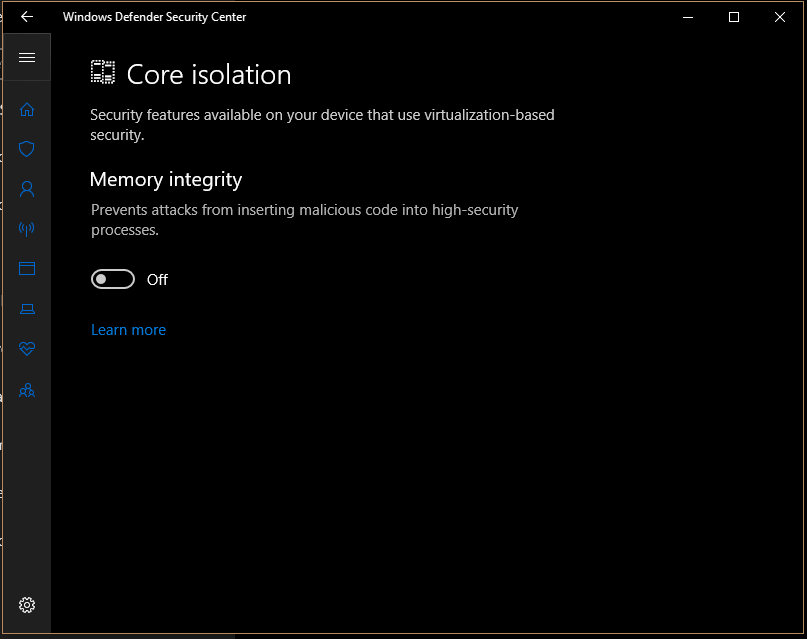 I had the same issue. In my case I found two issues causing the problem

I was able to resolve my problem of the missing acceleration with the following workflow on Windows 10, Lenovo, Intel Core i7 CPU:

Opened a cmd (MS-DOS) shell Window and executed haxm_check.exe to check whether CPU supports HAXM - it outputs in my case:

So, I knew this most be a setup problem. So, I started the setup program intelhaxm-android.exe in the same folder with Admin account and removed the installed components. After that, I've attempted to re-install with the same setup program and got this output:

So, I went into the CPU section of the BIOS and turned on acceleration/Virtualization - went back to the setup program and re-ran it, this time I was pleased to see this output: 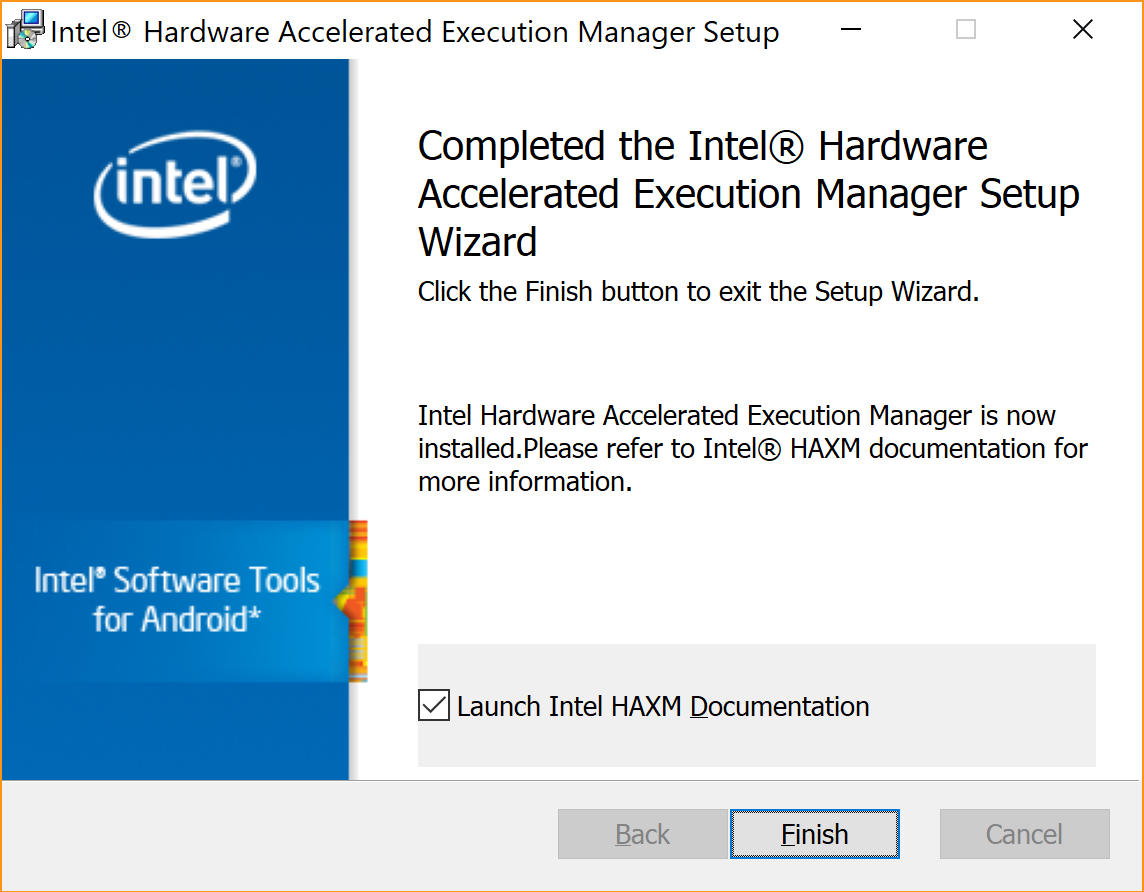 After that, I restarted Android Studio and used Tools>AVD Manager to define a new image for an emulator. I was then able to see the emulator starting up succesfully by clicking the play button in the list of emulators in the AVD Manager's list:

or by - Opening a sample project that compiles OK - using File > Sync Project with Gradle Files (to build all artifacts) - Select the app item in the Android (TW) and click Run > Run 'app' - Select the previously configured Emaulator showed me this :-)

Hope this helps to troubleshoot others with their problems that are really caused by a bad setup implementation since the missing acceleration option was silently swallowed by the Android Studio setup program ... :-( 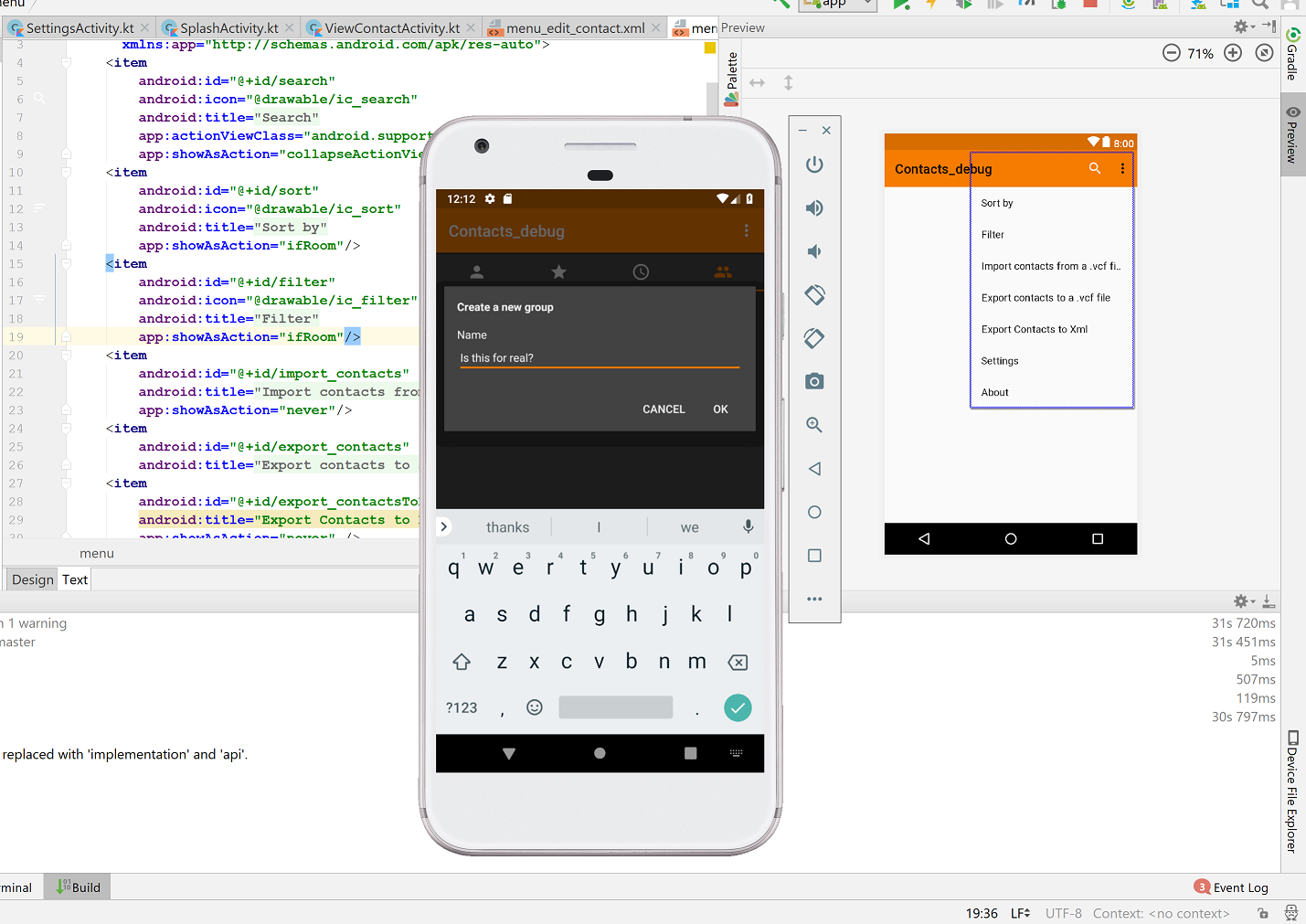 Thx. This helped me get the Emulator running, but now I can't get the App to install on my chosen device. How is this different from the multiple other answers that mention BIOS settings? This isn't another possible reason, it's the same one again.

Please keep attention on mentioned specific case: BIOS settings updated/reset after successful HAXM install and usage. F.e. by other users using machine or BIOS update. Many of us knows about BIOS settings was, and looks for problems in another places. I failed in same way.

If you are using an AMD CPU, AMD Virtualization (CPUs such as Ryzen) is now officially supported. Make sure you have virtualization switched on in the BIOS.

In "Turn Windows Features On or Off" (you can find it through Windows Search), you'll need to enable

Once you restart and start up the emulator (an x86 build), it should start booting up without the mentioned error.

Is this support retroactive or only Ryzen and newer?

One thing worth mentioning: Sometimes you can't enable Hyper-V right away because it is disabled via the BIOS settings of your mainboard. Unfortunately it's called differently in the BIOS settings depending on your manufacturer.

In the android sdk manager it says that it has hardware accelerator already installed but I think it is only downloaded not installed.I just manually installed the intelhaxm-android.exe and it worked for me.

plus I had docker installed , there were some answers to disable Hyper-V features, therefore I did that too, but not sure whether it helped or not.

I solved this Issue by enabling virtualization technology from system Settings.

Your system settings may be changed According to your Computer. You can google (how to enable virtualizatino for YOUR_PC_NAME).

I hope it helps.

This thread has some potentially useful info: github.com/intel/haxm/issues/77#issuecomment-405943152

If you recently installed Docker on Windows OS, you need to turn off the Hyper-V feature. See the top answer of VT Not Supported when Installing HAXM 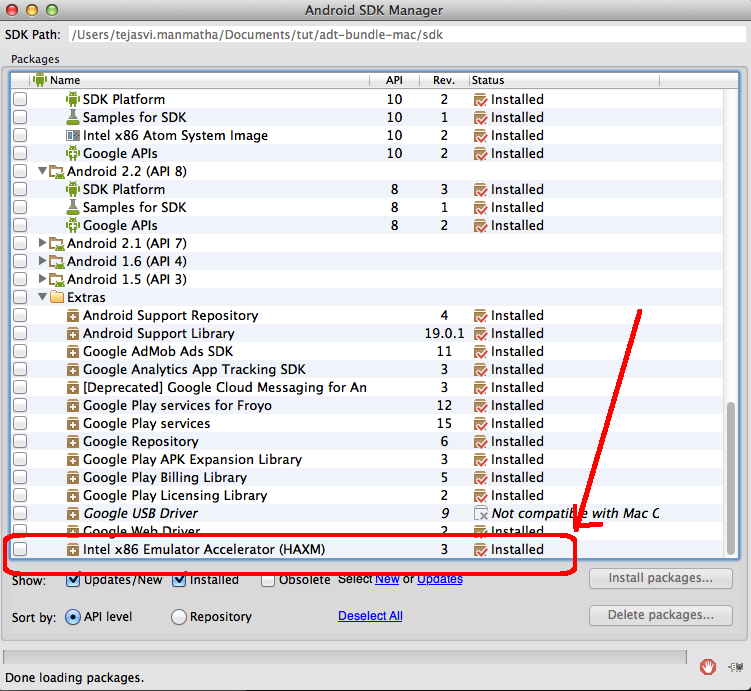 If you have Android Studio installed, you can start the SDK manager via Tools -> Android -> SDK Manager.

The Android SDK Manager does not actually install HAXM, it just downloads it. In the top of the Android SDK manager window, you can find where the installer is located on your PC. Please open the subfolder extras\intel\Hardware_Accelerated_Execution_Manager, and run the installer manually: intelhaxm-android.exe.

To use the intel HAXM, you need to have a CPU with virtualization support:

Before attempting to use this type of acceleration, you should first determine if your development system’s CPU supports one of the following virtualization extensions technologies:

If your CPU does not have virtualization support, you could use an ARM emulator instead:

You can edit an existing, or add a new Virtual Device in the Android Virtual device Manager, and change CPU/ABI to ARM. If that option is not available, you may need to change the target API of the Virtual Device, or download an ARM system image for the API version you want using the Android SDK manager.

Hi, Thank you so much for your quickly response! Do you think I have got Android SDK Manager? If, I install the Intel x86 Emulator Accelerator, will this change something in my computer?

You should be able to access the SDK manager from Android studio: lirent.net/wp-content/uploads/2013/12/… What do you mean with: will this change something in my computer

Hi, I have found my Android SDK Manager and the Intel x86 Emulator Accelerator (HAXM installer) was installed

Ok, that probably means ShiDoiSi is right. To verify this, please check what kind of CPU you have and post the name and type number here.

I am so sorry, how can I find what kind of CPU I have and what is the name and type number?

That is hard to say without knowing what Operating System you use (Like: Windows, or OSX). You could use software like this to help: cpuid.com/softwares/cpu-z.html The name we are looking for is something like: Intel I5 4460 or AMD FX 6300

And my system is Windows Vista Home Premium

I happen to have a CPU with the same feature set (E8400). The Android SDK Manager did not actually install HAXM on my machine, just downloaded it. In the top of the Android SDK manager window, you can find where it is located on your PC. Please open the subfolder extras\intel\Hardware_Accelerated_Execution_Manager, and run the installer manually: intelhaxm-android.exe. I got the x86 emulator running after that.

Hi thanks a lot, When try to install as you suggested, I got information: VT not supported This computer does not support Intel Virtualization Thchnologe (VT-x). HAXM cannot be installed. Please refer to the Intel HAXM documentation for more information.

For reference, this is the feature specification of your CPU: ark.intel.com/products/29753/… I'm sorry, but that means you cannot run and Android x86 emulator on that machine. However, you could use the Android ARM emulator instead, i think that one does not require VT-x

OK, I agree that my computer is not good enough to run the Android x86 emulator. Can you tell me how can I use the Android ARM emulator instead?

You can edit an existing, or add a new Virtual Device in the Android Virtual device Manager, and set it to use the ARM cpu: i61.tinypic.com/2vwa8fk.jpg If that option is not available, you may need to change the target API of the Virtual Device, or download an ARM system image for the API version you want using the Android SDK manager.

@KompjoeFriek - you should edit your answer to include the information that you need to run the installer after downloading it. It really isn't clear from any of the information in the SDK manager's user interface that this extra step is required.

On Mac, the Android SDK gets installed at: /Users/username/Library/Android/sdk/, therefore, you will need to run the script as sudo, as follows:

If all goes well, the script prints the message: "Silent installation Pass!"

Then, restart Android Studio and run your app with the desired AVD.

Open Android SDK manager, on top side you can see the "Android SDK Location" go to that location and follow this path

here you will get "intelhaxm-android.exe" install this setup.

I wasted too much time on this, I find that the AVAST is the issue!!! If you have AVAST installed in you system, you have to:

Go to settings tab --> troubleshooting, then you should UNCHECK the "enable hardware-assisted virtualization"

Restart your PC, the install the intelhaxm-android.exe if it is not installed. You can find it:

I don't see such item "enable hardware-assisted virtualization" there.. Could it be they removed it - in the mean time ?

This steps worked on Mint 17.2 Rafaela:

Right click on your my computer icon and the CPU will be listed on the properties page. Or open device manager and look at the CPU. It must be an Intel processor that supports VT and NX bit (XD) - you can check your CPU # at http://ark.intel.com
Also make sure hyperV off bcdedit /set hypervisorlaunchtype off
XD bit is on bcdedit /set nx AlwaysOn
Use the installer from https://software.intel.com/en-us/android/articles/intel-hardware-accelerated-execution-manager
If you're using Avast, disable "Enable hardware-assisted virtualization" under: Settings > Troubleshooting. Restart the PC and try to run the HAXM installation again

Emulator Error : x86 emulation currently requires hardware acceleration, dunno what i can do

[SOLVED] How can I run Android emulator for Intel x86 Atom without hardware acceleration on Windows 8 for API 21 and 19?

[SOLVED] Will Android studio HAXM support for this PC specification?

[SOLVED] Emulator in android studio not working..it shows this error..What should i do?