This is valid and returns the string "10" in JavaScript (more examples here):

Why? What is happening here?

If we split it up, the mess is equal to:

Therefore, we can simplify it (++ has precendence over +):

Again, we can simplify the mess into something more legible. Let's substitute [] back for A:

Before +[] can coerce the array into the number 0, it needs to be coerced into a string first, which is "", again. Finally, 1 is added, which results in 1.

Let's simplify it even more:

Also, this is true in JavaScript: [0] == "0", because it's joining an array with one element. Joining will concatenate the elements separated by ,. With one element, you can deduce that this logic will result in the first element itself.

In this case, + sees two operands: a number and an array. It’s now trying to coerce the two into the same type. First, the array is coerced into the string "0", next, the number is coerced into a string ("1"). Number + String === String.

This is quite a maze, but to do +[], first it is being converted to a string because that's what + says:

The unary + operator converts its operand to Number type.

When the [[DefaultValue]] internal method of O is called with hint String, the following steps are taken:

a. Let str be the result of calling the [[Call]] internal method of toString, with O as the this value and an empty argument list.

b. If str is a primitive value, return str.

The .toString of an array says:

When the toString method is called, the following steps are taken:

Again, the + is defined as:

The unary + operator converts its operand to Number type.

ToNumber is defined for "" as:

The MV of StringNumericLiteral ::: [empty] is 0.

Suggestion: make the "++[[]][0] to [] + 1" transformation explicit in the post. It makes the whole thing a lot more understandable for those of us who don't actually know JavaScript!

@pimvdb: I'm pretty sure the problem is in the PutValue call (in ES3 terminology, 8.7.2) in the prefix operation. PutValue requires a Reference whereas [] as an expression on its own does not produce a Reference. An expression containing a variable reference (say we'd previously defined var a = [] then ++a works) or property access of an object (such as [[]][0]) produces a Reference. In simpler terms, the prefix operator not only produces a value, it also needs somewhere to put that value.

nit: An instanceof Array (like []) will never === an Array other than itself, as the Strict Comparison Operator simply compares lref to rref (i.e. the memory locations of each instance). I wouldn't recommend even implying this. You might also note in your answer that JS' Unary + Operator has precedence over the result of any arithmetic expression result or string concatenation (depending on context) with ++ or + which is why +[] gets evaluated first.

So these [+[]] will return [0] as they have an empty array which gets converted to 0 inside the other array... 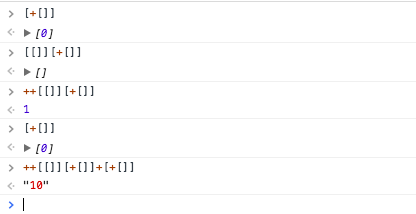 This one evaluates to the same but a bit smaller

so is evaluates to

So now you got that, try this one:

Well no it still evaluates to "10". However this is doing it in a different way. Try evaluating this in a javascript inspector like chrome or something.

Perhaps the shortest possible ways to evaluate an expression into "10" without digits are:

Then JS evaluates the 1 + [0], thus Number + Array expression. Then the ECMA specification works: + operator converts both operands to a string by calling the toString()/valueOf() functions from the base Object prototype. It operates as an additive function if both operands of an expression are numbers only. The trick is that arrays easily convert their elements into a concatenated string representation. The answer is confused/confusing, IOW wrong. [] is not equivalent to "". First the element is extracted, then converted by ++.

The following is adapted from a blog post answering this question that I posted while this question was still closed. Links are to (an HTML copy of) the ECMAScript 3 spec, still the baseline for JavaScript in today's commonly used web browsers.

First, a comment: this kind of expression is never going to show up in any (sane) production environment and is only of any use as an exercise in just how well the reader knows the dirty edges of JavaScript. The general principle that JavaScript operators implicitly convert between types is useful, as are some of the common conversions, but much of the detail in this case is not.

The expression ++[[]][+[]]+[+[]] may initially look rather imposing and obscure, but is actually relatively easy break down into separate expressions. Below I’ve simply added parentheses for clarity; I can assure you they change nothing, but if you want to verify that then feel free to read up about the grouping operator. So, the expression can be more clearly written as

Breaking this down, we can simplify by observing that +[] evaluates to 0. To satisfy yourself why this is true, check out the unary + operator and follow the slightly tortuous trail which ends up with ToPrimitive converting the empty array into an empty string, which is then finally converted to 0 by ToNumber. We can now substitute 0 for each instance of +[]:

Simpler already. As for ++[[]][0], that’s a combination of the prefix increment operator (++), an array literal defining an array with single element that is itself an empty array ([[]]) and a property accessor ([0]) called on the array defined by the array literal.

So, we can simplify [[]][0] to just [] and we have ++[], right? In fact, this is not the case because evaluating ++[] throws an error, which may initially seem confusing. However, a little thought about the nature of ++ makes this clear: it’s used to increment a variable (e.g. ++i) or an object property (e.g. ++obj.count). Not only does it evaluate to a value, it also stores that value somewhere. In the case of ++[], it has nowhere to put the new value (whatever it may be) because there is no reference to an object property or variable to update. In spec terms, this is covered by the internal PutValue operation, which is called by the prefix increment operator.

So then, what does ++[[]][0] do? Well, by similar logic as +[], the inner array is converted to 0 and this value is incremented by 1 to give us a final value of 1. The value of property 0 in the outer array is updated to 1 and the whole expression evaluates to 1.

This leaves us with

As a final aside, something that may not be immediately apparent is that overriding either one of the toString() or valueOf() methods of Array.prototype will change the result of the expression, because both are checked and used if present when converting an object into a primitive value. For example, the following

... produces "NaNfoo". Why this happens is left as an exercise for the reader...

+[] evaluates to 0 [...] then summing (+ operation) it with anything converts array content to its string representation consisting of elements joined with comma.

Anything other like taking index of array (have grater priority than + operation) is ordinal and is nothing interesting.

Then we have a string concatenation

[SOLVED] How do I return the response from an asynchronous call?

[SOLVED] What does "use strict" do in JavaScript, and what is the reasoning behind it?

[SOLVED] When to use double or single quotes in JavaScript?

[SOLVED] Why does Google prepend while(1); to their JSON responses?

[SOLVED] How to check whether a string contains a substring in JavaScript?

[SOLVED] Is it possible to apply CSS to half of a character?

[SOLVED] How does data binding work in AngularJS?