[SOLVED] Unix: confusing use of the Tee -command

Manual states that the tee is a "pipe fitting"-tool. The cases [1] confuse me:

It is hard to understand the logic of tee from the cases. How does the tee work?

tee is normally used to split the output of a program so that it can be both displayed and saved in a file. The command can be used to capture intermediate output before the data is altered by another command or program. The tee command reads standard input, then writes its content to standard output. It simultaneously copies the result into the specified file(s) or variables 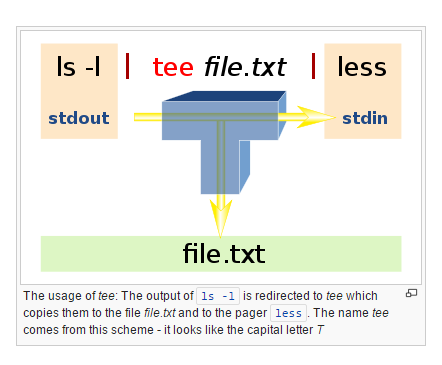 Maybe, you can then show how you redirect the output also to less when you already use sudo.

tee command simply creates N+1 no of files , 1 copy passed to stdout and others to the arguments provided to tee (ie files ) where N: number of agruments passed to tee

Explanations for the Cases

1. the escalation of permissions with the sudo- and -tee commands

The example is not about just logic, rather convention. It shows the convention to escalate permissions:

This example shows tee being used to bypass an inherent limitation in the sudo command. sudo is unable to pipe the standard output to a file. By dumping its stdout stream into /dev/null, we also suppress the mirrored output in the console.

Since you can use Sudo-commands with Vim, you can use the command if you forgot to run as a sudo. It is useful in places such as /etc/init.d/, where you will find read-only files.

It is like a branch in Git, or better, please, see the T analogy by Rick Copeland. Hopefully, the modified example (original) helps to understand its use:

I find that the tee command is very useful in debugging shell scripts that contain long pipelines. This is the tail-end of a ghastly shell script that is a decade overdue for a rewrite in Perl, but it still works. (It was last modified in 1998, as it happens.)

The three sed scripts that are run are ghastly - I don't plan to show them. This is also a semi-decent use of eval. The normal temporary file names ($tmp.1, etc) are preserved by a fixed name (tmp.1, etc), and the intermediate results are preserved in tmp.4 .. tmp.7. If I were updating the command, it would use '"[email protected]#"' instead of '$*' as shown. And, when I'm debugging it, then there is but one file in the argument list, so the trampling of the debug files is not an issue for me.

Note that if you need to do so, you can create several copies of the input at one time; there is no need to feed one tee command into another.

If anyone needs it, I have a variant of tee called tpipe which sends copies of the output to multiple pipelines instead of multiple files. It keeps going even if one of the pipelines (or standard output) terminates early. (See my profile for contact info.)

Remember that the target of tee is not restricted to regular files, but can be to devices, FIFOs, etc. Also, you can pipe to another tee invocation, and so on. :-)

tee is used to split a command pipeline, allowing you to save the output of a command to a file and send it along down the pipeline. In the first example you gave::

"foo bar" will be echoed to standard output and appended to /path/to/some/file. Think of tee like a "T" joint in a pipe, splitting the output into two other pipes.

That's where the name comes from :-)

tee simply mirrors the output into a file that can be specified as the argument to tee.

tee copies stdin to stdout (like cat) and additionally writes everything to the named file. Using it this way with sudo allows one to push information into a privileged mode and - at the same time - monitor whether the right stuff went there.

Also note, that due to the way redirection is handled in the shell the almost equivalent

won't work, since the redirection would be done by the calling user and not by the sudo target user.

what if the stdout data is too large how does it push data to file ? by size or by time period ?

[SOLVED] How to permanently set $PATH on Linux/Unix?

[SOLVED] How can I convert a Unix timestamp to DateTime and vice versa?

[SOLVED] How do I write stderr to a file while using "tee" with a pipe?

[SOLVED] Tee to commands only, not stdout

[SOLVED] grep a tab in UNIX

[SOLVED] How does/frequent unix tee command write stdout terminal output to file? if the output is too big